If you have an antique Tiffany lamp you're interested in selling,
you've come to the right place.

Louis Comfort Tiffany (1848 - 1933) is often associated with Tiffany & Co., the firm founded by his father, Charles Lewis Tiffany. Although Charles had hoped his son would succeed him as head of the company, Louis's interests leaned more readily toward those of an artistic nature.

Louis Tiffany began his art glass experiments in the early 1880s at the time he was purchasing sheets of commercial window glass from outlets in Brooklyn. On December 1, 1885, he incorporated the "Tiffany Glass Company," which in 1892 was renamed The "Tiffany Glass and Decorating Company" and then, in 1900, "Tiffany Studios." At its height, the factory employed more than three hundred workers: designers, artists, glass blowers, and numerous other artisans.

Tiffany's first commercially produced lamps date from around 1898, though some examples were exhibited at the 1893 World's Fair in Chicago. In addition to lamps and lamp shades, Tiffany Studios also produced vases, scent bottles, tiles, stained-glass windows, glass mosaics and desk furniture. The company remained in business until 1928.

In 1919, Tiffany established the Louis Comfort Tiffany Foundation as a retreat for young artists at Laurelton Hall, his summer residence on Long Island. He died in 1933 at the age of 85. From 1933 - c. 1936 the firm's original "Ecclesiastical" department remained in business in order to complete the firm's outstanding window commissions. 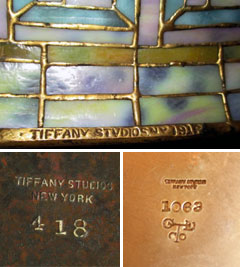 There are many old and new high quality reproductions and forgeries around of Tiffany Studios lamps. Many of them are so good they can fool dealers and collectors alike. Some of these have been made for more than 55 years, and they still continue to be made.

Stamps, signatures and other markings are often added to imitations both during and after production to give them the appearance of being the "real" thing, and only expert appraisers and collectors with a trained eye for Tiffany's distinctive style are qualified to distinguish one from the other.

Below are examples of the type of detail we'd like to see in the photographs you send us of your lamp(s). To inquire about a lamp currently in your possession, please complete our Tiffany Lamp Assessment Form. Upon its completion, you will be furnished with the information you need to forward your digital images to us. Ideally, please take photos using outside natural light without a camera flash to show the most accurate and clearly detailed colors, signature marks and other details. If you have any questions on photos, feel free to call me or email. 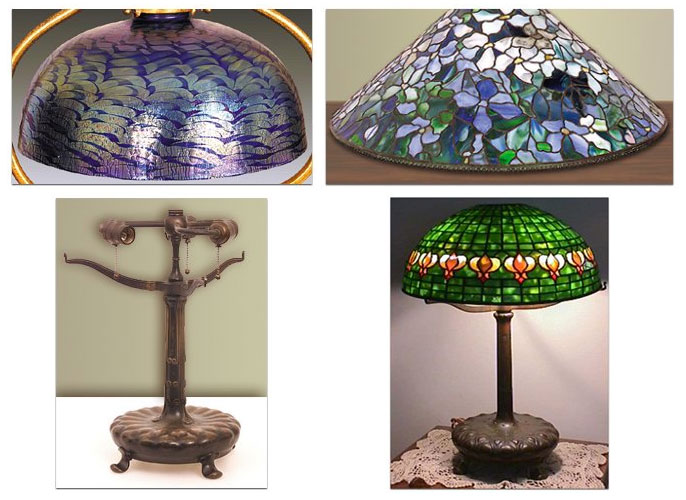 Each lamp created by Tiffany Studios was a unique, handcrafted work of art. The variety of designs and styles are many, and the images presented herein are only representative.

Tiffany lamp shades can be grouped into the following styles and shapes: 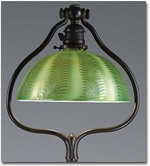 Favrile Glass Lamps: Tiffany trademarked the name "Favrile" to generically describe his production. The term means handcrafted and is associated with the first and simplest shades made by Tiffany. Favrile glass included several types of glass which Tiffany also used in the making his beautiful stained-glass windows as well as leaded and blown shades. Today, the term Favrile is meant to describe forms such as shades and other types of "hollow ware" glass (such as a “floriform” vase).

Geometric Glass Shades: Tiffany's geometric shades are the group of leaded glass shades with the simplest designs, and this would include standard shapes such as squares, triangles, rectangles and ovals, used on the cone, panel glass, and globe-shaped shades. Unlike his blown (also often called "damascene") shades, Tiffany's geometric shades were made from pieces of poured glass which were cut in segments and edged with copper foil, then soldered together. A patina bronze finish or "rinse" was applied to the lead or solder lines to blend in well. Tiffany's geometric group can be split into two types: shades made from a limited number of large glass pieces, such as the famous and much sought after "turtleback tiles," and shades made from a large number of small glass pieces.

Floral Design Shades: The floral group is a combination or blend of both geometric and floral shades. It includes globe-shaped shades of basic geometric design with added floral, vine, and leaf motifs. The floral group is divided into two categories which are the shades with scattered floral or leaf patterns all over on geometric backgrounds, and the geometric shades with borders, called "belts" of flowers and vines. The latter shades are called "belted" floral shades.

Cone Shaped Shades: Floral patterns are used extensively in the cone shades. Cone shades are basically just straight sided with circular rims. They were much easier and cheaper to make than leaded shades with curved or rounded sides. As a result, there are a significantly larger number of shades existing that were made in this shape. Cone shades are also found in the "geometric group," but they are named by their design rather than their form. A very important design which Tiffany was fond of, which was often applied to the better cone-shaped shades, is the dragonfly. The dragonfly pattern was used more in the globe and "irregular" (see below) lower border shaped shades. It is highly desirable and often commands high prices in today's marketplace.

Globe Shaped Shades: The plainer, flowered globe shades were much more difficult and detailed in their construction than the cone shaped shades. The dome design or shape helped the artists working on those shades to create a much more realistic scene or "picture" of the floral and insect designs that were used. Globe shades can range in size from twelve inches to twenty-eight inches in diameter. They were always the choice for large floor lamps. 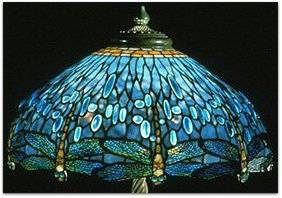 "Irregular Lower Border" Shades: These shades have a much more natural form, with their flowing, "serpentine" meandering rims. In this group of shades, you now can see a curved, irregular shaped lower border. Almost all of the shades used in the irregular border shade group are of the globe shape.

Irregular Upper & Lower Borders Group: These were the most sophisticated and complex shaped shades done by Tiffany's craftsmen. The shades have both irregular upper and lower borders. In this group the typical straight edge of the top of the shade opening (aperture) is replaced by an openwork "crown" which is made to look like tree branches. The top "finials" have been also been eliminated, and light and heat are vented out through the top crown. A good example of one of the finest of these shades is the Tiffany "Wisteria" pattern lamp shade. It is one of the most sought after and valuable of all the designs Tiffany ever produced, and as with most of his floral shades, it comes in various color combinations, from beautifully and intricately cut and positioned pale pastels, to rich, deep colored hues.

While we invite your inquiries and photos regarding our services and information on the lamp you have in your possession, please note: We will give you our preliminary opinion as to authenticity (if what you have appears to be an authentic Tiffany lamp) and a broad price range. We do not however, provide free appraisals or other specifics unless we are going to help you broker your lamp..